skip to main | skip to sidebar

Cd Jacket I designed for Bedroxx

It's still in the plastic!!!
Posted by Mr.I-AMAZE-EYEZ at 7:39 AM No comments: Links to this post

Zeph Inside the Antenna Mag!!!

Big up to Big D over at Sneaker Fiend Tees!!!

This is the latest issue of the Antenna Magazine with a t shirt I designed for Sneaker Fiend. It's a good look if I may say MYSELF!! LOL!!
Posted by Mr.I-AMAZE-EYEZ at 7:05 AM No comments: Links to this post 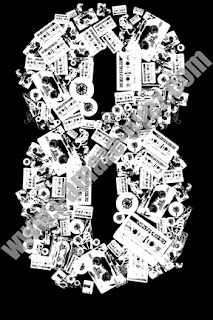 "Tuc Krueger" The Art Director from MKE Newspaper e mailed me about being showcased in the Milwaukee Newspaper last week. In the e mail he mentioned they also wanted me to contribute a "typographical illustration" for the 12 days of Xmas. 12 artist will be showcased as well each artist was assigned a number to illustrate and I got the number "8". I'm not gonna show the work that'll be published, you'll just have to get the paper or google my name to see it online. But I will show what I didn't use b/c I think it's hot too!

MKE Newspaper will be on news stands next week....
Posted by Mr.I-AMAZE-EYEZ at 6:26 AM No comments: Links to this post 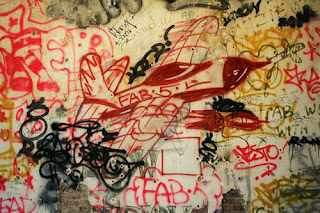 Thanks to Paul Mittleman for the heads up on this article on Yahoo News.. Read the entire article below.
It was the stuff of urban legend — rumors that a historic SoHo building had important graffiti hidden in its walls.

Except, in this case, it was true.

A large mural that was created by some of graffiti's earliest pioneers was discovered recently in a 10-story limestone building just as developers were converting it into luxury condominiums.

The artwork contains a variety of images and writing executed in spray paint, grease pencil, magic marker and whatever else was at hand — in silver, gold, pink and red. There are cartoonlike pictures of a bomber airplane, images of a heart and a cake, and several references to Quaaludes, a popular 1970s party drug.

The mural was found in the eighth-floor loft owned by art critic Edit deAk in the late '70s and 1980s — a time when much of fringe art, including graffiti, was being validated. The wall is nearly intact, except for gaps where a dishwasher and plumbing were installed years later.

Fab 5 Freddy and Futura 2000 — who helped pioneer graffiti as an art form by spray-painting entire subway trains in psychedelic colors — figure prominently on the wall. There's also writing believed to belong to Jean Michel Basquiat. The stylistic words "Dead or Alive" strongly suggest that it is the late artist's work. His tag, "SAMO," appears in the stairwell of the building.

But experts say the wall's significance doesn't depend on Basquiat, who died in 1988 of an overdose at age 27 and whose works command millions of dollars on today's art market. Rather, it's a testament to the underground culture of almost 30 years ago, and especially to the iconic artists who were living the art of the street.

"It's a great discovery," says Alberto Mugrabi, a major Basquiat and Andy Warhol collector. "It's the beginning of graffiti (as art)."

The developers, Michael and Izak Namer, purchased the building in 2004, and had long heard rumors about some hidden art. But they dismissed the rumors even after Rite-Art magazine editor deAk, who moved out in 1984, told them: "There is a Basquiat, and it's somewhere where you won't think it is."

Basquiat or not (DeAk did not return calls for comment), the mystery was solved last year by Michael Namer's son, Matthew, who was then living in the loft-turned-two-bedroom apartment.

"He started to poke around, climbs on the kitchen cabinets and opens up a little piece," says Namer. "Futura 2000" in black and gray stylized calligraphy was revealed — a "Holy Grail" of graffiti since Futura was only 16 when he wrote it. The building's conversion — by renowned architect Lee Skolnick — was immediately halted in the former loft.

Treating the site like an archaeological dig, the kitchen cabinets came down with the gypsum board behind it. Another wallboard and a white tiled wall hid a smaller section of the mural, found in what had become a bathroom.

Finding themselves in possession of "an iconic piece that created the renaissance of what downtown became — a viable and interesting place to live," the Namers say they set out to authenticate the wall. They consulted with Guggenheim chief conservator Paul Schwartzbaum, Dennison, Mugrabi and other experts.

"Is it an artwork or is it a relic of the era? It's a little bit of both," says Dennison, who is now executive vice president at Sotheby's. "It has the hands of so many artists, and that's what makes it so interesting and exciting."

The mural will be publicly unveiled Thursday as part of a retrospective exhibit of the graffiti art movement (1980-1985). Running until Feb. 15 in the SoHo building's Gallery 151, "The Wild Style Exhibit" takes its name from the iconic 1982 hip-hop movie.

The show will display works of graffiti's greats: Keith Haring, Basquiat, Kenny Scharf, Ero and Fab 5. All come from private collections, many unseen since the 1980s, including Scharf's "Palladium, a mural canvas created for the reincarnated Palladium Music Hall and Disco, and Basquiat's portrait of Fab 5 Freddy.

The Namers have invested "in the six figures" on the mural, hiring art conservator Harriet Irgang and California landscape photographer Bob Weingarten to document the process and produce a catalog for the exhibit.

Irgang has stabilized the two walls by applying an adhesive to flaking paint and glitter. Next, she will cover the mural with tissue paper, cheesecloth and a stiff fabric to enable the graffiti to be "peeled" off — a process that involves using spatulas and chisels to separate the plaster from the coarse brown mortar behind it. Once freed, the graffiti will be mounted on a lightweight panel so it can be moved.

Ultimately, the Namers want to donate the graffiti to a major museum and are currently in discussions with several. Few graffiti walls exist, as many were painted over or destroyed.

Fred Brathwaite, also known as Fab 5 Freddy, a hip-hop pioneer who has forged a career in music videos, says the graffiti was a spontaneous collaboration among the various artists who visited the loft.

He calls the wall a "visual document to a turning point in a cultural landscape and in the art world."

Basquiat mentor Diego Cortez agrees. "They took something that was local — self taught like folk art — and made it something beyond that," he said.

In 1979-1980, he drew a large red airplane dropping a bomb (as an antiestablishment symbol) and spray-painted "Fred" and "Fab 5 Freddy" after DeAk asked him to "tag my wall."

The loft was a kinetic space where artists creating and experimenting in new art forms could crash, cook a meal together and swap ideas. Brathwaite says he came there with Futura and Basquiat and recalls mingling with filmmaker Eric Mitchell, members of the rock group Blondie and fashion model Lisa Rosen, who appeared in the Basquiat cult film "Downtown 81."

The loft was a microcosm of the scene outside: a burgeoning art district with galleries showing artists Roy Lichtenstein, Frank Stella and Andy Warhol, and nightclubs like the Fun Gallery and Mudd Club — fixtures of the underground music and counterculture.

Dennison says the mural could be a wonderful addition to any museum, especially as a focus of an educational program, given that some of the artists are still around.

It could potentially also find a place in SoHo, she says, as "a freestanding monument to the era."
Posted by Mr.I-AMAZE-EYEZ at 6:17 AM 2 comments: Links to this post

ENTER THE WORLD OF ZEPH FARMBY

Mr.I-AMAZE-EYEZ
Chi-Town, United States
I Amaze Eyez.com is a portfolio of creative works by Chicago based Freelance Artist/ Designer Zeph. Using art as the platform to change lives and inspire others to achieve their dreams by pursuing their passions.